Jeremy Renner: Acting Gave Me the Freedom to Feel Rage or Sadness in a Safe Way (The Guardian)

The Avengers and Mission: Impossible star is famous not only for blockbusters but also as a great character actor. And then there’s the interior design. 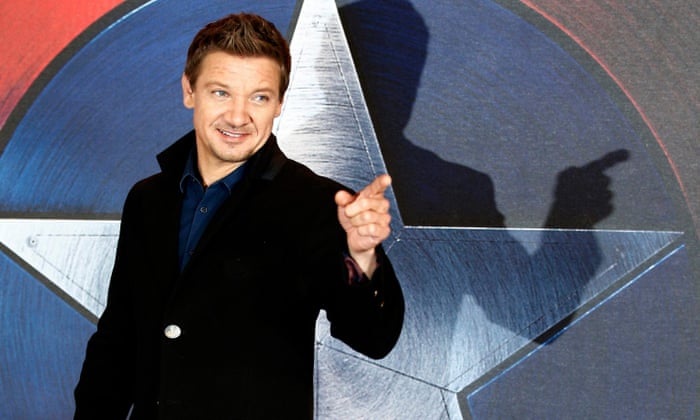 Jeremy Renner: ‘I loved that wonderful, awkward moment with all the superheroes sitting in his living room in the farmhouse.'Photo Credit: Peter Nicholls/Reuters

Jeremy Renner strides into the hotel room, shakes my hand (“Hey buddy”) and winces. It’s the air conditioning. Too cold. He goes over to the window and opens it. The curtains billow. Too breezy. While the publicist fixes the temperature, Renner sits down opposite me, crossing his arms and legs to keep himself warm. A good room, he says, is one where you would feel happy strolling around naked. A place in which to literally hang out. “That’s the idea. You’ve got to feel at ease.” Does this room fit the bill? He gazes around. “It might be a little big for my taste. I like a boutiquey feel. I go with emotion and instinct. How do we give each room its own beautiful energy? You might like a dual-colour couch and bright curtains. That’s fine. Me, I like these ones here. Something more muted.” He indicates the taupe curtains. It strikes me that I am being instructed in the principles of interior design by one of the Avengers.

He is wearing a baseball hat, leather jacket, jeans and Chelsea boots. Prescription glasses dangle from the neck of his sweatshirt and his face is evenly tanned. At 45, he is part pug, part prettyboy; it is this mutability that makes him such an effective character actor. Yes, he has triple franchise commitments. In Marvel’s Avengers films, he is Clint Barton, AKA Hawkeye, the layperson with no superpowers to speak of, just top-notch archery skills. There’s the Bourne series, which he took over from Matt Damon, before Damon decided to return. (One Bourne producer has promised that a sequel to Renner’s The Bourne Legacy is still on the cards.) And he was in the last two Mission: Impossible films. “I know they’re talking about coming round again and my answer is always ‘yes’”.

But blockbusters only tell part of the story. He is a double Oscar nominee – the first for his career-changing performance as a bomb disposal expert in The Hurt Locker, the second for playing a volatile thug in The Town. He has never blanched at a challenge or displayed actorly vanity. He raped a child in The Heart Is Deceitful Above All Things, sexually harassed Charlize Theron in North Country and deflected the romantic attentions of a pubescent girl in Twelve and Holding. For an illustration of exactly how diverse his appeal is, try this: he turned down an invitation to join a boyband in the early 90s; 10 years later, he played the serial killer Jeffrey Dahmer. Even as Dahmer, he was oddly endearing, able to alter his appearance with the tiniest adjustment of emphasis behind the eyes. In some parts of the movie, he was like a delicate angel, in others a baby-faced gargoyle with chip-pan hair. 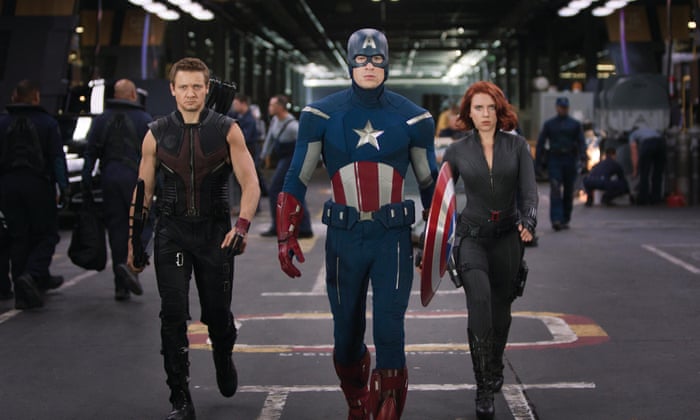 We have met to discuss his latest – brief – outing as Hawkeye in Captain America: Civil War. “That’s sorta the journey of our characters. Sometimes you’re in it more than others.” He got a heftier slice of the pie in Avengers: Age of Ultron, which showed the gang chilling on Hawkeye’s farm. It was like a superhero soap opera, and all the lovelier for it. “Oh, that stuff was great,” he agrees. “I loved that wonderful, awkward moment with all the superheroes sitting in his living room in the farmhouse.”

Renner is open about his dissatisfaction with the first Avengers movie, in which he spent most of his screentime as one of Loki’s hypnotised minions. “That was my first chance getting to play the character and I wasn’t really getting to play him at all. ‘Hi, my name’s Clint – bzzzzzzzzz.’” He goes crosseyed and mimes falling under a spell. “It was frustrating. I don’t even know at that point how the guy walks and talks, ’cos he got turned into this other dude. Joss [Whedon] was really apologetic. He had an impossible task trying to fit all those characters into one movie. I’m glad I got to find the character next time around.”

He insists it wouldn’t be in his nature to keep shtum about his frustrations. “I command excellence from everybody around me. If you’re passive, nothing improves. It’s the squeaky wheel thing. If you don’t talk about something, nothing changes, nothing gets done. ‘Oh hi, everything’s cool, I’m really happy with just being an extra here!’ Well, actually I’m not. Use me if you’re gonna use me. If not, recast me. It’s nothing specifically to do with Marvel or Mission: Impossible in particular, it’s how I feel in general. If you have a nice car and you don’t get it out of first gear, then what’s the point? You may as well just go get a Prius.” 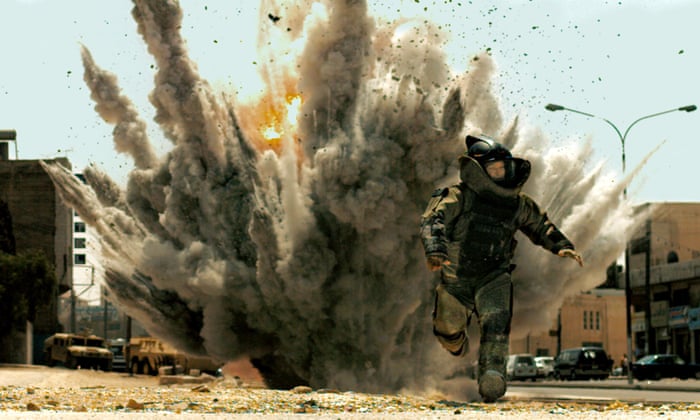 These days he is careful to vary his acting diet so it isn’t all tentpole movies. Should you have an eight-figure sum handy, he might even sell you a lavishly renovated house. He moonlights as a real-estate developer, hence all the chit-chat about interior design. With his business partner and fellow actor Kristoffer Winters, he has been “flipping” houses (buying them, often living in them while doing them up, then selling them) for about 15 years. He queries my suggestion that he made a $17m (£11.7m) profit on one property. “Let’s see, that was a $7m purchase and we sold it for $24m. But there were investors and various costs so ...” Either way, I think we can agree that it’s a nice sideline.

And it has helped pay for extravagances at his own home, such as a lagoon with a dive bridge and waterfall. Who needs their own lagoon for goodness sake? “Dude, it’s amazing! I designed it myself. I was faxing and emailing the plans back home from Italy.” He wasn’t born with this eye for design. “Coming from no money in this smalltown middle-of-nowhere place, my only access to nice locations has been through travelling for jobs over the last 25 years.”

Renner grew up in Modesto, California, the oldest of five siblings. His parents divorced when he was 10. (In recent years, his father, who ran a bowling alley when Renner was a kid, has had two more children. The actor’s youngest sibling is three years old – the same age as his own daughter, Ava.) He got into acting as a way of managing his emotions. “It was therapeutic. The stage was a safe place for me as a man with a lot of feelings inside which I had not exposed before. Where I’m from, it would have been unacceptable – people would have told me I was a crybaby. So, I held everything in. Playing characters gave me the freedom to have all those feelings, that rage or sadness, in a safe way.” 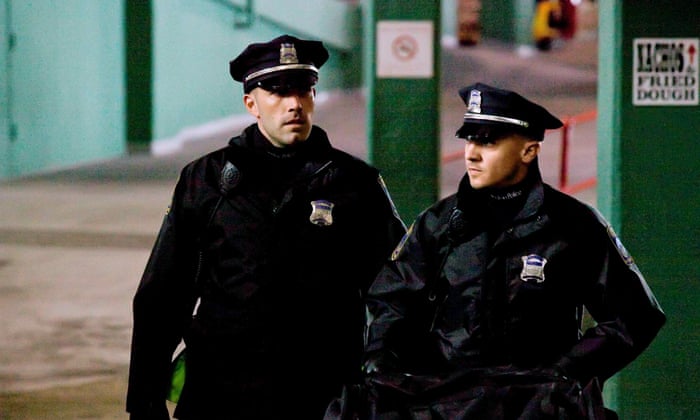 With Ben Affleck in The Town.  Photo Credit: Allstar/WARNER BROS.

After playing criminals in training exercises at Modesto’s police academy, he moved to Los Angeles in the early 90s. Within a year, he was fifth-billed in the comedy National Lampoon’s Senior Trip. He was 23. Peering through his blond, curtained fringe, he delivered lines such as “That chick needs to get laid!” in a stoner’s sleep-talking drawl. “Oh man! That was a huge thing for me. I was nervous as all heck. I remember jumping and screaming when they told me I got the part. I was kissing the dirty old carpet. They said: ‘You’re going to Toronto!’ I was, like: ‘Awesome! Where’s Toronto?’”

It was around this time that Winters met Renner when they worked on a TV show together. “Basically, we’ve been brothers ever since,” Winters tells me by phone. “We do everything together.” They have been roommates many times over the years, but he refuses to be drawn on Renner’s bad habits. “He doesn’t have any.” So, he’s never even put down a coffee cup without a coaster? “Nope. Never.” He thinks the key to Renner’s appeal is inscrutability. “There’s a mystery to Jeremy. It’s like you don’t know if the food needs more salt or if he’s trying to poison you. He’s drawn toward unexpected choices – 99% of people would read a line of dialogue one way. He’ll come up with the twist.”

David Jacobson, who wrote and directed Dahmer, recalls an actor of uncommon focus and vividness. “He had this visible inner life, which a lot of actors don’t have,” he says. “You could see instantly there was something going on emotionally and mentally. It’s what makes him so fascinating to watch. He made Dahmer someone the audience might empathise with on some level.” That film was crucial in Renner’s development. “It was a milestone for me,” he says. And it gave notice of the level of moral complexity he was willing to undertake. Indeed, it was seeing Dahmer that convinced Kathryn Bigelow to cast him in The Hurt Locker

But playing a serial killer took its toll. “Jeremy used to go shopping in character at the supermarket,” says Jacobson. “After the movie opened, he told me that Carmen Electra had run away from him after seeing it. He accused me of ruining his sex life!” Renner found it hard to shake off the role. “It really screwed me up. I couldn’t go to a bar alone without experiencing anxiety.” He still can’t, although these days it’s for a different reason. “Now I got people coming at me all the time. They want a picture and I’m sat there with spaghetti coming outta my mouth.”

Asked what he would like to see more of in his friend’s career, Winters doesn’t miss a beat. “His sense of humour. Jeremy is always playing the rapist, the murderer, the scumbag, but he’s actually wickedly funny. I think he’ll turn into one of the greatest character actors of our time. I don’t know how much longer he’ll wear the superhero tights, you know? But he will be around for ever. It’s more whether he’ll want to keep acting.”

Renner sounds several equivocal notes during our conversation regarding the sort of long-distance work that separates him from his daughter. An ugly and protracted custody battle with his ex-wife seems only to have intensified his determination to stay home. Like Hawkeye, he just wants to get back to the farm. Or, in his case, the lagoon. “I’m producing movies so that I can stay with my child,” he says. One such example is The Founder, starring Michael Keaton as the man who started McDonald’s. Renner has also made an album, although he’s not sure whether to release it. “It’s about my personal life and I’m pretty tight-lipped about all that. They’re very emotional songs.”

That reminds me. He never did spill the beans about which boyband it was that he turned down. “No, I didn’t,” he chuckles. Well, he’s 10 years older than Justin Timberlake, so it can’t be *N Sync. I feel I am within an inch of outing Jeremy Renner as a Backstreet Boy. Will he confirm? He won’t answer, but his laughter gets more raucous and gravelly as he stands up and throws an arm around my shoulder. I tell him I’d better not read the scoop in another paper. “I promise you won’t, man,” he says as he leaves. “I give you my word.” His rattling laugh sounds like bones in a tumble drier as he disappears down the hall. I believe him.

•Captain America: Civil War is released in the UK on 29 April.