The Hollywood actor loves to dig deep, and for his latest role as a Wyoming hunter, he used his own stories of loss. 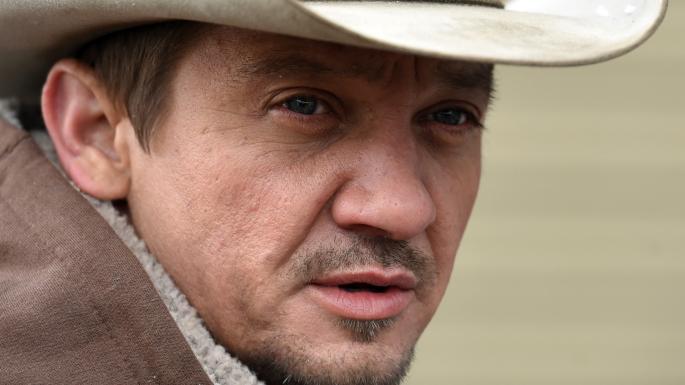 Best in the West: Jeremy Renner as Cory Lambert in Wind River

It is the Cannes film festival in May and Jeremy Renner is running 45 minutes late. He is stuck on a yacht. (Three months on, when we catch up by phone, he is running 20 minutes late. Stuck on a helicopter.) It is not a bad life, I suggest, when he finally strides into a bare, beige room in a private residence just off the Croisette. He shrugs, plonks his squat, powerful frame onto a plastic chair and runs a hand through his spiky hair. His right biceps bulges alarmingly.

“It’s all right,” he concedes flatly. It is impossible to tell whether he is now blasé about the A-list lifestyle or just a little embarrassed to discuss such privilege, having come from a thrifty background; the oldest of seven siblings from various unions, he took on dad duties aged 10, when his parents split. Suddenly, an aw-shucks grin smooths out the creases of his unconventionally handsome face. “Jet lag is winning, man,” he sighs.

Tonight he will face a firestorm of cameras for the premiere of his new movie, Wind River. He has spent an increasing amount of time muscling his way through some of Hollywood’s biggest blockbusters in the Mission: Impossible, Avengers and Bourne franchises, and this murder-mystery/ modern-day western marks a striking return to the potent character work that made him a star in the first place.

Renner, 46, plays Cory Lambert, a taciturn US Fish & Wildlife Service agent who is allowed access to the titular Native American reservation in Wyoming to kill predators that prey on farm animals. While tracking a family of mountain lions across blizzardy slopes, he happens upon the barefoot corpse of an 18-year-old woman. The remainder of this absorbing, heartfelt, sometimes brutal drama sees Lambert team up with a rookie FBI agent, Jane Banner, played by Elizabeth Olsen, to uncover harrowing secrets.

It is a routine plot, unfurled with little fuss. What makes Wind River fascinating is its portrait of a close-mouthed man frozen by grief, and its sharp eye for a community ravaged by poverty and loss. It is the last in the writer/director Taylor Sheridan’s loose trilogy looking at the mythology of the American frontier through a modern lens, after screenplays for Sicario (drug trafficking on the US-Mexico border) and Hell or High Water (bank robberies in dirt-poor Texas). “Nobody mentions the Native Americans,” Sheridan told me earlier. “They’ve been, essentially, on really big prisoner-of-war camps for the past 130 years. It’s offensive.”

Renner is more circumspect. He refuses to be drawn on how Wind River’s highlighting of racial intolerance is relevant in today’s America, stating: “This is something that’s been going on a long time.” He stresses: “My energy was not put into understanding what it’s like to live on a reservation, because I’ll never understand that.” Pushed, he does offer: “The people who funded the movie were Native Americans, because they felt it represented the community in a real way.”

Thankfully, he is more comfortable discussing the internal make-up of Cory Lambert — a character close to home. How was it that the director of The Bourne Legacy, Tony Gilroy, described Renner? Hard on the outside and sweet within?

“Yeah, very much so,” he agrees, tugging at the collar of his black sports T-shirt and adjusting the bracelet of beads that bites into his right wrist. “It’s hard to be yourself. You put on a show to protect yourself when you’re soft and gooey on the inside.” He brushes at an invisible piece of lint on his plaid trousers.

“I used my personal experiences for Cory. I’m a father [he married the Canadian actress Sonni Pacheco in 2014; they separated 10 months later and have a four-year-old daughter], so I connected with that. I’m one of seven kids. I birthed one of my sisters. I birthed one of my sister’s kids. And then I birthed my own daughter. I’ve lived with strong women and, me being the eldest, I’ve taken the protector role, unflappable, the stone.”

He blows out a breath. “So I explored that. There’s no way to research loss. I was limited to my own perspective. Losing a cousin, six months old, to a crib death. Or having a rape in my family. Whatever it might be. I took my own loss. I got to act out a version of who I am. I fell apart in most scenes.” 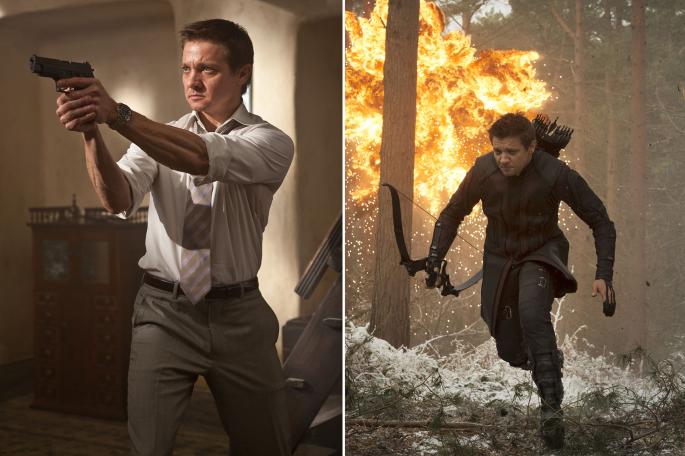 On Target: Renner played William Brandt in Mission Impossible: Ghost Protocol and Hawkeye in The Avengers.

The son of Valerie and Lee Renner, who managed a bowling alley in Modesto, California, Renner discovered acting at Modesto Junior College. After moving to San Francisco to study, he made it to LA, via Hawaii, in 1993, aged 22. It was his empathic portrayal of the serial killer in the 2002 indie Dahmer that first turned heads; later roles included a child-rapist in The Heart Is Deceitful Above All Things, and a blokey boss who sexually harasses Charlize Theron in North Country.

“I don’t have an ego about that stuff,” he shrugs when I volunteer that it takes courage to dig for humanity in such hateful parts. “I just find human behaviour interesting. Maybe it’s courageous, maybe it’s not. Maybe it’s that I just don’t care.”

This bravery, or indifference, has not held him back. Oscar nominations followed for playing a reckless bomb-disposal expert in Kathryn Bigelow’s Iraq War drama The Hurt Locker and a hair-trigger criminal in Ben Affleck’s The Town. He parlayed his success into landing those aforementioned franchises. So where is he now with the Mission, Avengers and Bourne movies?

“I’m not in Mission: Impossible 6 [filming now],” he says. “There was a conflict of scheduling with Avengers: Infinity War. If they do another Mission, I’d love to do it again. I really like that character [the IMF operative Brandt]. I know Tom Cruise really likes that character. Infinity War, we’re shooting now. There are a lot of cool ideas and shifts happening in that world, for all those characters. Bourne — I had a great experience on it, but I’m not banging on the doors, saying, ‘Hey, when are we doing another one?’” 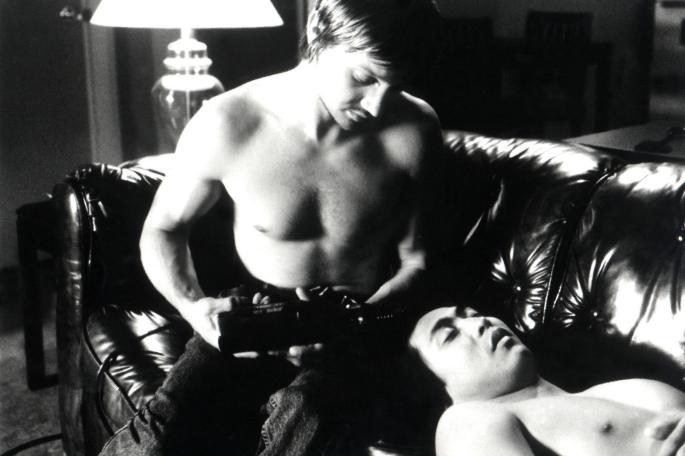 Renner’s agent, Aaron Cross, took over the superspy franchise in the fourth film, The Bourne Legacy, when Matt Damon exited. The response, critically and commercially, was tepid, and Damon returned in the fifth instalment, Jason Bourne. The talk since has been of bringing the two together. “If the storyline’s right, then certainly I’d do it,” Renner nods. “I love Matt.”

He has retreated into clipped sentences, and it is obvious that he prefers discussing his character parts, be it in Wind River or Arrival or American Hustle. Given his sensibilities, it is surely no coincidence that, in the Avengers series, he plays the one superhero, the ace archer Hawkeye, with no superpowers. “Yeah, totally — a guy flying around with a hammer kinda lost me,” he smirks. “But they asked me to do Hawkeye and I thought, ‘I get this — the guy has a skill set and is kinda cool. I could dig into that.’ Hawkeye stands by the principles I stand by. Maybe that’s why they write it. I don’t know. But this is me. Love me, hate me, I don’t give a shit.”

He smiles. “Look, I get a big rush off doing action movies. Going up the Burj Khalifa with Tom Cruise is amazing. But I like to get out of second gear and dig into behaviour and storytelling. That’s where I feel I excel. If I could always do Wind Rivers and Hurt Lockers and The Towns, it’s all I’d be doing.” And between gigs? “I go to my house in the mountains. No traffic, clean air, clear water. That’s where I spend a lot of my time. With my child. Being a dad, your intentions change from selfish to selfless. That’s the biggest part of my life.” No flying — just feet planted firmly on the ground.